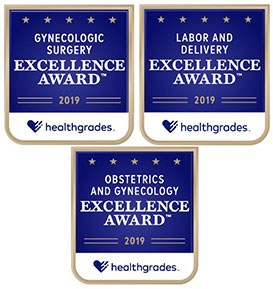 Healthgrades, a leading online resource for information about physicians and hospitals, recently revealed its list of recipients for their 2019 Women’s Care Excellence Awards – and Flushing Hospital Medical Center is among the privileged and few recipients.

These awards recognize hospitals across the nation that demonstrate exceptional outcomes and excel in women’s healthcare services. The awards were broken down into three separate categories, including:

Flushing Hospital received all three awards and was the only hospital in Queens to receive the Gynecologic Surgery and Obstetrics and Gynecology Excellence awards.

According to Maria Smilios, Director of Nursing, “Flushing Hospital has done many things that have contributed to earning these awards, including creating standards to prevent inducing labor before 39 weeks gestation to reduce the chances of complications at birth.” Maria added that “providing our patients with continuity of care throughout their pregnancy and stressing the importance of maintaining proper prenatal care have also been major factors in our success.”  Other reasons to cite the hospital receiving these accolades include having dedicated gynecologists and gyn specialists on staff, as well as the addition of the daVinci robotic surgical system,  which has improved gynecological surgical outcomes for Flushing Hospital patients.

Approximately 3,000 babies are delivered at Flushing Hospital every year. The gynecology division performed over 1,500 procedures in 2018 and the hospital’s Women’s Health Center had nearly 14,000 outpatient visits last year.

“We are honored to receive these awards” stated Dr. Hajoon Chun, Chairman of Ob/Gyn at Flushing Hospital Medical Center. “It signifies the hospital’s dedication to providing the highest quality care to women in our community and is another example of why Flushing Hospital is the hospital of choice for so many seeking obstetrical and gynecological care.”

Congratulations to all of the physicians, nurses, and support staff responsible in earning this recognition.